Note:  The Jets practiced on Monday in advance of tonight’s game against the Vancouver Canucks.  The Jets have lost Tucker Poolman for this homestand and while Bryan Little is skating in a non-contact jersey there remains no timeline for his return.  Today they face a Canucks team that sits two points ahead of them in the standings.  There will be a morning skate at Bell MTS Place today so be sure to check back for the pre-game report and then puck drop is at 7 pm.

Note II: The Moose lost their fourth game in a row and first to kick off this four-game homestand as they fell 5-3 to the Belleville Senators. Their record slips to 18-23-0-0 on the season. Eric Comrie was sensational in the loss making 35 saves.

Winnipeg Sun:  No urge for urgency just yet, but Jets see need for mentality shift.  I would say there has to be plenty of urgency with points at a premium.  You don’t want to be falling too far behind in this league.

Winnipeg Free Press:  Jets missing tenacious troublemaker after losing Tanev, Lemieux.  (Paywall).  Does an absence of shot disturbers hurt this squad?  Is that the missing element?  Mike poses that question. 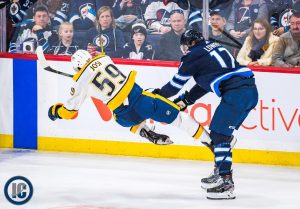 Winnipeg Free Press:  Jets juggle lineup in hopes of snapping home skid.  (Paywall).  Add in a little Copp and subtract Roslovic and the Jets are hoping that will be a winning formula.

The Athletic Winnipeg:  The bubble has burst in Winnipeg. So is it time for a shake-up?  (Paywall).  Nice line by Murat “If Winnipeg is serious about silencing its critics – and not its crowd…”.  With just over a month to go it will be very interesting to see what happens prior to the trade deadline.  Does this team get back Little and Byfuglien?  Can they afford to lose a 1st rounder in 2020?  So many questions.

TSN: ‘Urgency is the last thing I’m worried about with this team’: Jets know all games matter.  The Jets have lost their last two games and are banged up on the back end as they get set to face a tough test in the Canucks on Tuesday. When asked about if the team has kept a strong sense of urgency as of late, captain Blake Wheeler said it’s the last thing he worries about with his team, and that they know every game matters if they want to make a playoff run.