A look at the game 47 projected lineups and pre-game audio. 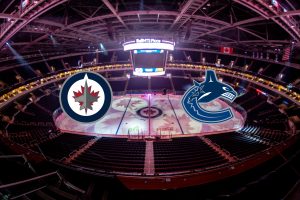 Tonight the Jets will face a Vancouver Canucks team that currently sits two points ahead of them in the Western Conference standings.  The projected lines and D pairs are simply based on yesterday’s practice at Bell MTS Place.  There wasn’t any indication as to which goalie gets the call tonight.

For a second straight day Bryan Little is on the ice (in a non-contact uniform) according to Mitchell Clinton of Jets TV.  It is an optional morning skate as per Scott Billeck of the Winnipeg Sun who indicates that Connor Hellebuyck isn’t on the ice and is your likely starter in goal.  Ken Wiebe of The Athletic Winnipeg adds that Jansen Harkins did not stay on for extra work while Gabriel Bourque did so it would appear the Jets 2015 2nd rounder is getting back into the lineup.

Coach Maurice confirmed that Jansen Harkins comes in for Gabriel Bourque.  He wouldn’t confirm his D pairs so we will have to wait for warm up skate at 6:30 pm to know which players are paired together.

No Dmitry Kulikov which mean Carl Dahlstrom draws in.

Adam Lowry on what they have to be aware of regarding the Canucks and an underappreciated aspect of Copp’s game.

Mason Appleton on what stands about the Canucks, on getting pucks through and the areas in which the Jets improved during the game in Nashville which they can bring into the game tonight.

Coach Maurice:  Any insight into the D pairings?  Role changes.  The type of game the Canucks play.  How different does the 2nd line look with Andrew Copp on it?  Where are the biggest areas of growth in Copp’s game?  Does he view Copp being able to handle a more offensive role on this team?  What has he seen from Jack Roslovic in the last ten games and his quest for consistency?  What has he learned about Jansen Harkins?  What are some of the things that Mason Appleton done to be effective on the penalty kill?  Is it a ‘tough sell’ to move Jack Roslovic from the second line to the third line?