Note:  The Jets were on the ice Sunday for a practice at the IcePlex as they got ready to face the Habs which goes today at Bell MTS Place ahead of the Christmas break.  Looks like Mathieu Perreault isn’t quite ready to return to the lineup and based on how they played against the Wild on Saturday it isn’t likely there will be any lineup changes for Winnipeg.  Stay tuned for the pre-game report which will have all the latest news and audio from morning skate.

Note II:  Couple of interesting Jets notes from the weekend Saturday Hockey Night in Canada segments.  On Saturday Headlines it was mentioned by Chris Johnston that the Wild could host the Jets in a Winter Classic in 2021 and then during the To The Point feature with Brian Burke he spoke about the relationship between Winnipeg and Dustin Byfuglien.

Note III:  The Moose dropped their game on Sunday in a re-match with the Rampage when a late goal by the visitors broke open a 2-2 tie late in the 3rd with the game ending 4-2 for San Antonio.  Following the contest coach Vincent provided an update on some of his injured players including Sami Niku and Kristian Vesalainen.  Manitoba is now off for a few days to rest and recover over the Christmas holidays.  They’ll be back in action on Sunday, December 29th when they welcome the IceHogs to town.

Winnipeg Sun: Jets Gameday – Five Keys to the Game.  Scott’s big matchup is Mark Scheifele vs Canadiens’ plan to stop him. His five keys to the game include: 1) Build off win. 2) Laine liftoff. 3) Brossoit’s turn? 4) Stop the bleeding. 5) Keeping the focus. 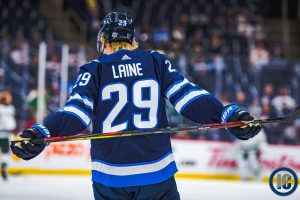 Winnipeg Sun: Beaulieu-Kunin dust-up more than just a fight for Jets.  Following the win over the Wild when Blake Wheeler had to hand out the fighter helmet they hand out after a game to the most deserving player he gave it to Beaulieu with the words “we take care of each other boys. Remember that boys”.  And then yesterday Beaulieu spoke about how “A lot of teams I’ve been on, we preach culture…this is the first team I’ve really been on that we really practice it. This is a very, very tight knit group in here. We take care of each other”.

The Athletic Winnipeg:  Reactions pour in after Blake Wheeler becomes Jets’ all-time points leader.  (Paywall).  Ken reached out to folks who have watched Wheeler’s development up close and personal throughout the years for this article.