The Moose came into action sporting a 15-17-0-0 record after they defeated the Rampage yesterday evening at Bell MTS Place in a wild 6-4 contest. 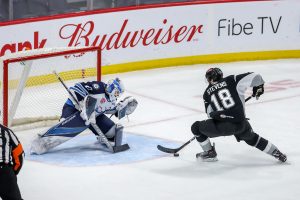 The Moose power play looked like it would give the homeside a chance to get this game started on the right skate but it was the Rampage who would strike first as Nolan Stevens scored a shorthanded goal off a Leon Gawanke miscue.  Manitoba would answer back in the opening frame as the red-hot Seth Griffith would tie the game at one when he buried a rebound off a Leon Gawanke shot.  The shots would be 9-9 through 20 minutes.

The 2nd period would be a bit disjointed to start but Manitoba would have a chance to take their first lead of the game after Austin Poganski was called for hooking.  However it was Nolan Stevens again who scored his second shorthanded goal of the game to make it a 2-1 lead for San Antonio.  Jets 2017 1st round pick Kristian Vesalainen, who had left the game in the 1st period, left against in the 2nd and would not return.  Rampage defenceman would get a five minute boarding major after he took out Skyler McKenzie and Seth Griffith would score his second goal of the game, also on the power play, as there was a delayed penalty called against the Rampage.  Luckily for the Moose it would still be a 5 on 3 as the delayed penalty call goal counted against the major.  However the middle frame would end 2-2 with San Antonio having a big shot edge of 18-10 and 27-19 overall in the game through 40 minutes.

Despite starting the 3rd period with a two-man advantage the Moose were unable to capitalize.  It looked like the game would go to overtime until late in the final frame Nathan Walker was able to beat Mikhail Berdin to make it a 3-2 game for the visitors.  Former Jets draft pick and Moose forward Ryan Olsen would finish things off with a goal late in the game to seal the deal at 4-2.

Seth Griffith is on quite a run having scored five goals in the past two games.  In total he has 17 goals this season in just 30 games.  He scored 16 last year for Manitoba in 69 games.  His career high is 24 which he achieved in 2015-16 with the Providence Bruins.  He should easily eclipse that total.

The Moose are on Christmas break.  They will be back in action next weekend.