Note:  It was a wild ride on Thursday for the Jets.  They didn’t practice until the afternoon but by the time they hit the ice their GM had addressed a couple of matters including the bizzare Dustin Byfuglien situation and he also advised that the team was assigning Ville Heinola to the Moose of the AHL.  Following their skate at SAP Center bench boss Paul Maurice announced that Mark Letestu was done for six months as he deals with a heart issue while Patrik Laine was ruled out and Bryan Little became a game-time decision.  Quite a bit to digest.  The team is expected to recall one or two players from the Moose (I’m thinking it could be CJ Suess, Joona Luoto or Alexi Chibisov).  No skate this morning but they have a media availability so we will have to wait until that time to learn about lineup decisions.  Be sure to check back for the pre-game report.

Note II:  The Moose will gain some and lose some players as they will add Ville Heinola to the squad but lose a guy or two with the Jets needing to make a recall.  Veteran forward JC Lipon after practice on Wednesday said the team needs to treat Saturday’s game as a “must win game” and with Manitoba at 1-7-0-0 he isn’t wrong.  The team is set to practice today at 11 am at Bell MTS Place as they get set for a pair of afternoon weekend games here in Winnipeg against the Griffins. 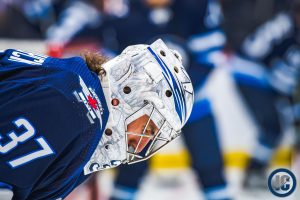 Winnipeg Sun: Jets get scary injury news on a crazy Halloween day.  It was one of those day’s that even though I chronicled it for this site throughout the day on Thursday it felt like I was writing fiction. In addition to recapping the events Ted also wrote about Ehlers moving on up.

Winnipeg Sun:  Jets Snapshots.  Ted begins with the assignment of Ville Heiona to the Moose.  He also touches on Nathan Beaulieu getting closer to a return and Kyle Connor needing to relax.

Winnipeg Free Press:  Problems aplenty for Jets.  (Paywall).  These guys appear to be the embodiment of the first part of Jay-Z’s classic song as they’ve got “99 problems” right now.

Winnipeg Free Press:  Jets GM talks to reporters about Byfuglien surgery, status… and says nothing.  (Paywall).  Mike doesn’t pull any punches in this article regarding what has become known as ‘Chevy Speak’.  Sometimes in his zest for a non-response the Jets GM spends too much time saying lots of things of little value.  The problem for him is the audience has ears and they can understand when you’re saying a lot of words but not really saying anything at all.  I think everyone would have preferred a “no comment” in response to the Byfuglien question by Friedman on Saturday night to “I don’t know even how to answer that question in the sense that, again, it’s a complicated issue.”.  And it would appear based on the reaction from fans that they would have preferred a “we are not commenting on this situation” to what they heard on Thursday.

The Athletic Winnipeg:  What the latest saga twist means for Dustin Byfuglien and the Jets.  (Paywall).  About the only bone of contention I have with Ken’s article is I would suggest that Byfuglien is easily the most popular player that has played for this team.  He had the fans hearts on the opening shift of the split squad exhibition game against the Blue Jackets that first season and it has only escalated from there.  But getting to the meat of Ken’s piece the fact is that every time it appears there is some sort of insight or answer, two or three more questions arise.

Illegal Curve:  Nikolaj Ehlers doing the most heavy lifting offensively for the Winnipeg Jets this season.  With all the bad news surrounding the Jets here is a good news story.

TSN Hockey Analyst Dave Poulin joined Andrew Paterson and Rick Ralph on the Afternoon Ride. They discussed Dustin Byfuglien’s independent ankle surgery in Minnesota, how the Jets are handling the situation and if insurance is a factor.

Nikolaj Ehlers doing the most heavy lifting offensively for the Winnipeg Jets this season
Game 14: Jets vs. Sharks projected lines