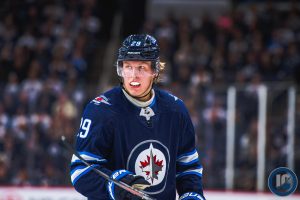 Coach Paul Maurice was asked today after practice about the status of Patrik Laine who didn’t play in the last Jets game against the Ducks and left practice early today in San Jose “Ya he’s not going tomorrow.  He’s not ready.”.  In a follow up comment the bench boss of Winnipeg added that today’s skate was to “see where he’s at.  He didn’t feel like he could play tomorrow.”.

Which means the Jets will be without one of their top wingers for a second straight game.  It isn’t just the wingers that could be impacted against the Sharks however as the status of centre Bryan Little is also in question after he left practice early.  Coach added that he couldn’t get loose and will be evaluated tomorrow.

Check out the Practice Report for more from San Jose.

Winnipeg Jets Mark Letestu has a virus in his heart; shut down for six months
Nikolaj Ehlers doing the most heavy lifting offensively for the Winnipeg Jets this season