Jets GM chats with the panel. 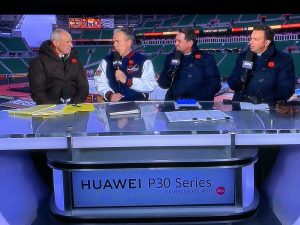 Ahead of tonight’s Heritage Classic in Regina between the Jets and Flames there was a chat with Jets General Manager Kevin Cheveldayoff and the Hockey Central Panel of Ron MacLean, Kelly Hrudey and Elliotte Friedman.  After a preamble about Cheveldayoff’s Saskatchewan roots they asked about his hockey club.

Kelly Hrudey:  “Do you think this kind of environment might help Blake Wheeler a little bit and what is the organization trying to do to help him because he seems like he is in a little bit of a funk, maybe a little bit frustrated with some of his comments?”

GMKC:  “Well, you know again, Blake wears his emotions on his sleeve.  He is a true competitor both on and off the ice.  He’s a real leader but there’s no one who cares more, not only about his own individual game, but about the team game itself.  So obviously, again it’s that emotion that does drive us.  Blake’s someone you never have to worry about.  He works so hard and again, he’s a big part of our success.  Again, everything doesn’t always have to be smooth.  You’d like it to be smooth.  Certainly special teams you’d like those to just click from the beginning.  Last year, ironically, we relied on our power play.  For the first 20, 30 games our power play was automatic and the rest of your game kinda probably falters as well, so we know we’ve got a lot of work ahead of us and again we’re going to embrace that.”

Elliotte Friedman: “Do you have a deadline for Dustin Byfuglien?”

GMKC:  “I don’t know even how to answer that question in the sense that, again, it’s a complicated issue.”

Elliotte Friedman: “I understand Paul Maurice is in the last year of his contract.  When do you decide what you’re going to do with him?”

GMKC:  “I don’t really discuss much about coaches’ contracts.  Paul Maurice is a great coach and for us I think he’s a really good fit.”