Note:  The Jets ended the weekend with a 4-1 win over the Flames in their fourth exhibition game to improve to 2-1-1 on the pre-season.  Their next game is Tuesday in Calgary and then they’ll be back in Winnipeg to take on the Oilers on Thursday night.

Note II:  The Jets will skate today as training camp continues here in Winnipeg.  Group 1 is scheduled to hit the ice at the IcePlex at 9 AM while group 2 is scheduled for 12 noon.  Here is an updated look at the composition of the two groups.

Note III:  In case you missed it on Saturday night we learned that the Jets had suspended Dustin Byfuglien in a move that bench boss Paul Maurice described on Sunday as purely procedural and one that number 33 was aware would occur.

Sportsnet: Five reasons why the Winnipeg Jets are still Stanley Cup contenders.  Fans will be happy simply seeing the Jets and Stanley Cup in the same headline especially as some pundits question the Jets ability to even make the playoffs.

The Athletic Winnipeg: Four players helping their cases and three players hurting them after 10 days of Winnipeg Jets camp. (Paywall).  No shockers on Murat’s list but an interesting read nonetheless as this article is about much more than just the headline.

The Athletic Winnipeg:  Rookie blueliner Ville Heinola makes his case for an unexpected extended stay in Winnipeg.  (Paywall).  He is noticeable when he hits the ice each and every single time he is out there and that is not in a bad way.  Ken has more on the Jets top pick from 2019 as he dazzles during training camp.

Winnipeg Sun:  Cool, calm Brossoit backstops Jets to second win.  The Jets have to be happy that the netminder appears to have picked up where he left off last season. 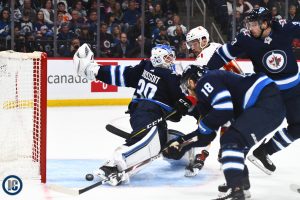 Calgary Sun:  Flames goalie Talbot lets in three goals in loss to Jets.  Read about the game from the perspective of a writer that covers the Jets opposition.

Winnipeg Free Press:  Dominant Jets too hot for Flames.  (Paywall).  Mike recaps the game as he saw it last night at Bell MTS Place and it includes his assessment of five players (Ehlers, Kulikov, Suess, Vesalainen and Poolman).

CBC:  Jets burn Flames with dominant final frame.  Probably best not to get too excited when you beat a Calgary team that looks more like their farm club in Stockton than the NHL club will this season.

TSN:  Maurice hoping Little can be a model of consistency for Roslovic.  Winnipeg Jets head coach Paul Maurice explained why he thinks Bryan Little can be a positive example for 22-year old Jack Roslovic, who can learn from Little’s consistency and work ethic as they play on a line together.