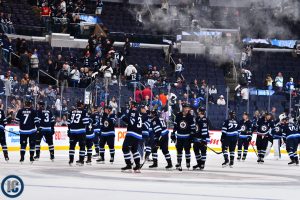 Much like the game against the second pre-season game against the Wild the Jets opened the scoring quickly as Jack Roslovic scored off a rebound from a Tucker Poolman shot just 50 seconds into the 1st period.

The Flames would tie it with Dmitry Kulikov in the penalty box as the Flames finally beat Laurent Brossoit on their 22nd shot of the game six minutes into the 3rd.  Blake Wheeler would tap home an Anthony Bitetto shot from the point to give Winnipeg the lead about three minutes later, Joona Luoto would tip home a Logan Stanley point shot and then Nikolaj Ehlers would finish things off with an empty net goal off a nice pass from Blake Wheeler to make it 4-1.  Laurent Brossoit made 22 saves.

Coach Maurice:  What did he like about the game?  Thoughts on Anthony Bitetto tonight.  What’s the benefit of not having to worry about the backup goalie heading into the season?  On players creating order from the chaos of these types of games.  How might it impact a goalie?

The Jets back on the ice for practice on Monday as training camp continues and will play their next exhibition game with a re-match against the Flames on Tuesday night in Calgary.  Kick start your day with the AM Jets papers which go live at 7 am on illegalcurve.com.