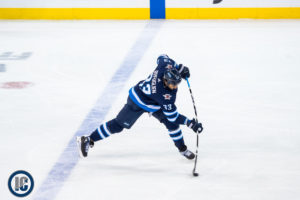 Well even an off day for the Jets can be eventful these days.  As per TSN insider Bob McKenzie the Jets have filed paperwork to suspend Dustin Byfuglien as he ponders his future.  This is what McKenzie had to say:

WPG has suspended Dustin Byfuglien for failing to report to camp. If he doesn’t report by opening day, WPG loses his cap hit until he does report.

Not nearly as ominous as it sounds. WPG still wants Byfuglien back but needs to protect roster and cap flexibility until they know his intentions.

The paperwork has been filed but it can be reversed at any time and it’s not something that would come as any surprise to Byfuglien. In the meantime, WPG waits while he ponders his future.

And you thought it would be a quiet Saturday night.

In case you were wondering how this would impact the Jets cap the folks at Cap Friendly have that covered:

With @TSNBobMcKenzie reporting that the #NHLJets have suspended Dustin Byfuglien without pay until further notice, we have temporarily removed the veteran d-man’s cap hit from Winnipeg’s salary cap.

As a result, we now show the Jets with roughly $23M in projected cap space. pic.twitter.com/b2aWwdsM09

Jets coach Paul Maurice was speaking ahead of the Jets/Flames game and was asked about the move the Jets made on Saturday. He indicated that “Paper. It is absolutely procedural and Dustin was aware of it.”