Note:  The Jets looked poised to get their second pre-season win last night but they gave up a late goal and ultimately lost in OT to the defending Stanley Cup champion Blues.  The team is off today and will be back on the ice on Sunday as they get ready to face the Flames at home.

Note II:  Coach Maurice indicated that big training camp cuts weren’t expected until the 25th but did say in his post-game comments that the team did send two of their junior aged players back to their respective squads.

Note III: Today’s Illegal Curve Hockey Show on TSN Radio 1290 will focus on the Jets with the second half of the show completely dedicated to our Annual Regular Season Fantasy Hockey Preview. We have our three regular guests scheduled to join us (Gus Katsaros of McKeen’s Hockey, Pete Jensen of NHL.com and Kevin Woodley of InGoal Magazine and NHL.com) as we get you set for the 2019-20 Fantasy Hockey Season.  It all gets started at 9 am.

Winnipeg Sun:  Jets still above water after tumultuous week off the ice. 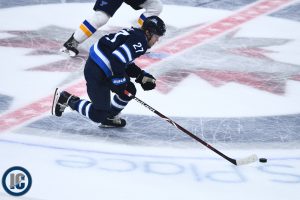 NHL.com:  Byfuglien meets with Maurice regarding future with Jets.

The Athletic Winnipeg: Jets’ roster picture still a bit cloudy, but players on the bubble are emerging.  (Paywall).

The Athletic:  On Cheveldayoff’s patience.  (Paywall).

TSN: Ehlers impresses in preseason debut.  Dennis Beyak and Kevin Sawyer break down what they saw from Nikolaj Ehlers in his preseason debut and take a closer look at Gabriel Bourque’s performance against the Blues.

TSN: ‘It’s all about chemistry’: McLennan on what Jets’ defence and Hellebuyck need. The Jets have a completely new look to the defence and at some level, that has to impact Connor Hellebuyck in some way. TSN Hockey analyst Jamie McLennan joins SportsCentre to discuss what adjustments he needs to make and offers his take on how long a new defence takes to adjust to.

TSN: Off-season changes, Byfuglien’s uncertainty opening opportunities on Jets’ backend. The argument could be made last season that the Jets had one of the deepest defensive cores in the NHL, but this past off-season brought no shortage of change. When the season opens, Winnipeg will be without three, potentially four depending on the status of Dustin Byfuglien, of their top 5 defencemen from last season. Sara Orlesky has more.