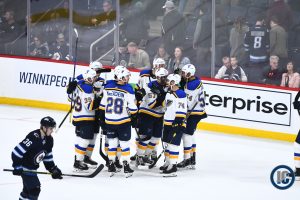 The Jets looked like they were going to win this one after a late third period goal courtesy of Gabriel Bourque but the Blues clawed back as David Perron scored the game-tying goal as well as the winner in overtime.

Coach Maurice:  What did he take from that game?  What has Chibisov shown him?  Why does he like him on the right side?  How much more comfortable did Pionk look?  Seeing Nikolaj Ehlers flying around the ice.  His thoughts on Nelson Nogier. Does he see him as a forward?  How much does it help him knowing the forward game.  On how the team played 3 on 3 or 6 on 5.  Breaking it down.  When does he want to start making some cuts?  What did he learn about Heinola’s defending against NHLers?  Is it ridiculous to think that Heinola could stick around late in training camp?

The Jets are off tomorrow and will play their next exhibition game against the Flames on Sunday night.  Kick start your day with the AM Jets papers which go live at 7 am on illegalcurve.com.