Note: Puck drop is at 7 pm as the Jets get set to take on the Blues for their third exhibition game of the pre-season.  After the Jets game, be sure to check us out for all the post-game reaction.

Note II:  Didn’t realize when I tweeted this video that today is the eight year anniversary of the first Jets pre-season game which was a split squad contest against the Blue Jackets.  I am fairly certain this is where Dustin Byfuglien cemented himself as a fan favourite in this city for life in that opening shift of that opening game.

Winnipeg Free Press:  Dissecting newcomer Pionk: Can make nice plays and skates well, but stats tell a disturbing story.  (Paywall).   Andrew looks at the player the Jets got in the Trouba trade.

NHL.com:  Byfuglien meets with Maurice regarding future with Jets.  While it should come with little surprise that the Jets bench boss wouldn’t disclose the nature of the meeting perhaps it would suggest it is closer to resolution.  Or it simply could have been a check in meeting and the time of pondering will continue.  For now we wait. 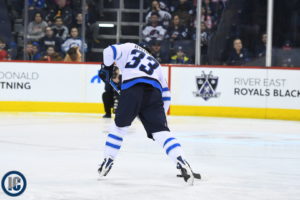 The Athletic:  On Cheveldayoff’s patience.  (Paywall).  Interesting angle by Justin Bourne in his notebook about the Jets GM.

Illegal Curve: Coach Maurice pre-game. Topics included – On inserting Jack Roslovic with Adam Lowry and Andrew Copp.  Will he start the season with Lowry and Copp?  On working on the Jets transition defence/gap control.  Frustrating to play against.  On the Byfuglien photo and comment that said “he’s playing”.  Changes overall to the blueline and the opportunities presented.  Is Adam Lowry ready for a bigger offensive role on this team?  Where did the conversation with Dustin Byfuglien happen?  Changes to the rule book and where he stands on the revisions to the coaches challenge.  Is he comfortable where the young guys are at?