Game 3 of the pre-season: Jets vs. Blues projected lines 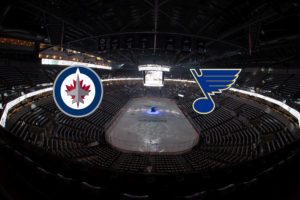 The dark cloud hanging over Winnipeg has dissipated somewhat and while there remains plenty of uncertainty the fine citizens of this land have turned their attention once again to hockey games.  Following their 4-1 win over the Wild on Wednesday night they will look to keep things rolling against the defending Stanley Cup champion St Louis Blues.

No skate this morning for the Jets but Brian Munz of TSN 1290 Winnipeg indicated the lines and D pairs will be:

Coach Maurice:  On inserting Jack Roslovic with Adam Lowry and Andrew Copp.  Will he start the season with Lowry and Copp?  On working on the Jets transition defence/gap control.  Frustrating to play against.  On the Byfuglien photo and comment that said “he’s playing”.  Changes overall to the blueline and the opportunities presented.  Is Adam Lowry ready for a bigger offensive role on this team?  Where did the conversation with Dustin Byfuglien happen?  Changes to the rule book and where he stands on the revisions to the coaches challenge.  Is he comfortable where the young guys are at?

Via Jeremy Rutherford of The Athletic St. Louis.