Note: The Jets are sporting a 1-1-1 record so far in the pre-season and will play their fourth exhibition game tonight as they welcome the Calgary Flames to town. The playing group will be on the ice at 10 AM which will be followed by a media availability so be sure to check back to the site for our pre-game report.  The non-playing group will be on the ice at 12 noon.  Puck drop is at 7 pm and will be followed with our usual post-game recap.

Note II: If you thought it was going to be a quiet off day for the Jets that was shattered when TSN’s Bob McKenize reported late night that the Jets had suspended Dustin Byfuglien due to failure to report to camp.  But McKenzie indicated it was more of a paper move in order to give them some cap flexibility.  And Jets coach Paul Maurice confirmed it was simply a procedural move and that Byfuglien was aware it was going to happen.

Winnipeg Sun:  Jets still above water after tumultuous week off the ice.  It has certainly been a wild week in ‘Peg City.

The Athletic Winnipeg:  On Patrik Laine, Paul Maurice and expected goals.  (Paywall).  Murat has more on one of the three topics du jour. 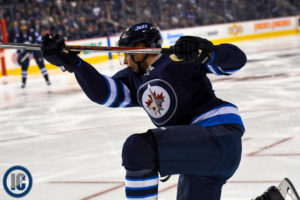 McKenzie Report: Winnipeg Jets have suspended Dustin Byfuglien for failing to report to camp
Game 4 of the pre-season: Jets vs. Flames projected lines