Note II: In total the Jets have selected 63 players since 2011. Yesterday we took a look at which leagues the Jets tend to favour and provided a breakdown of draft picks by country, and draft picks by position

Sportsnet:  Patrik Laine ‘prepared for anything’ with future in Winnipeg uncertain.  The first line of this article reads ‘Patrik Laine says contract talks with the Winnipeg Jets have been non-existent all summer’ which has to be a smidge disconcerting to some Jets fans. It begs the question why haven’t they been? If you are the Jets brain trust what else do you have on your ‘To Do List’ right now aside from signing Laine and their other big RFA in Kyle Connor (as well as goalie Eric Comrie).  Perhaps this is a ‘business as usual’ situation but you would think that there would be some engagement in discussions between the two camps.  You can also watch part of the video interview that Chris Johnston conducted with Laine here.  It is worth noting that Laine did say to Chris he is hopeful to have something done soon.

Winnipeg Sun:  Chang on top at Players Cup, Jets’ Connor at bottom.  The Jets RFA forward is playing on a sponsor’s exemption and had what I’d consider a good round (but truth is I’m not a particularly good golfer).  Connor will finish things up today before he heads back to Michigan.

CBC: Jets’ status as Stanley Cup contenders takes hit with loss of several key players.  Apparently it’s season preview time for the Jets already even though it’s mid-August and I suspect that based on what we have heard and read already it will be an ‘us against the world’ season next year in Winnipeg (which isn’t necessarily a bad thing). 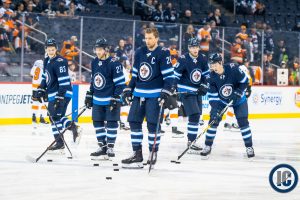 As I reported yesterday The Moose signed defenceman Charles-David Beaudoin to a one-year deal. Beaudoin has played 93 games for Manitoba the past two seasons.

Can you spot the difference in the Winnipeg Jets equipment for next season?
Winnipeg Jets RFA Patrik Laine talks contract status ahead of Finnish Alumni All-Star Game