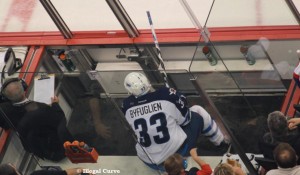 Yesterday’s Illegal Curve Hockey Show will be available to download later this afternoon.

Winnipeg Free Press: The Race This is one race that the Jets are falling out of.

Winnipeg Sun: Predators drop Jets 3-1 Could have been much worse if it wasn’t for Ondrej Pavelec. Good thing for Pavelec he is an RFA after this season and is due for a raise, here’s part 1 and part 2 of our analysis.

Winnipeg Sun: Snapshots: Comeback wasn’t in card for Jets If this game was earlier in the season, I don’t think we would be overly disappoined with the loss. They Jets were up against a Stanley Cup contender, on the road, on the second night of a back to back. It was 2-1 late in the third, and they had a shot to tie it.

Winnipeg Sun: Jets eye Preds for building pointers The Preds have been the most successful late 90s/early 00s expansion franchise in terms of on ice product, making the playoffs in six seasons. Atlanta moved to Winnipeg, Columbus has made the playoffs once in 11 seasons, not including the disaster of this season. Minnesota has made the playoffs three times and has gone the farthest of any of the four expansion teams with a visit to the Western Conference Final in 2003.

Side note: I went to a playoff game during Minnesota’s run in 2003, it was in the second round against Vancouver. I wore my Marcus Naslund jersey to the Xcel Energy Centre, proudly cheering for Vancouver with a few buddies. The Canucks won in overtime off of a Brent Sopel goal. To make a long story short, I’m happy I made it out alive.

TSN: Jets back-to-back woes continue against the Predators It’s been their achilles heel all season, the Jets are 1-10 in the second game of back-to-backs. I think after one season in Winnipeg under their belt, the road record and record in back-to-backs will improve. It can only go up from here right?

The Tennessean: Predators’ Radulov gets welcome-back party If the Nashville franchise wasn’t having so much success, and so close to a cup, would they be welcoming him back with such open arms? The guy bailed on his contract, he should be a villain, but Nashville has put together such a successful franchise, he’s now the savior and the scorer that they have needed for some time.


Puck Daddy: Atlanta Thrashers jerseys thrown on ice during Winnipeg Jets’ loss in Nashville I can’t blame them for showing their frustration, but I wouldn’t throw away a perfectly good jersey, there is always eBay.

Winnipeg Sun: Tootoo on scratch: ‘Pisses me off’ Glad to see a player showing some emotion, rather than holding back.

Ottawa Citizen: Senators break out offence in win over Penguins Impressive that they could go toe to toe with Crosby, Malkin & co.

Ottawa Sun: Sens pen a winner According to Sportsclubstats.com the surprise Sens have a 91.2% chance at making the playoffs.