Jets news: The good, the bad and the ugly. Pray for a lucky seven. The Race. Senators @ Jets preview. NHL playoff dream all but over for Jets. News and Notes. Jury weighs in on Jets.

Next opponent news – Ottawa Senators: Looking to maintain playoff position against fading Jets. Playoff time already. A look ahead. Back in control. Anderson a cut above.

Note:  I’d like to thank IC’s Michael Remis for stepping up to help out with the site while I was off gallivanting in Vegas for the past 5 days.

Winnipeg Free Press:  The good, the bad and the ugly.  Taking a look at the harsh reality which surrounds the Jets season.

Winnipeg Free Press:  Pray for a lucky seven.  It would be a tall task for the Jets to accomplish the goal but one this team has no choice but to attempt.

Winnipeg Free Press:  The Race.  Taking a look at the Jets routes to the post season and examining the teams they are battling with to get into the playoffs. 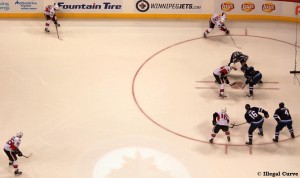 Globe and Mail:  NHL playoff dream all but over for Jets.  A little pragmatism as this Jets team will now be forced to rely on others to have any hope of dreaming about the playoffs.

Winnipeg Sun:  Jury weighs in on Jets.  Their is no doubt that Jets fans love their team, but even those I met in Vegas, had some harsh comments following the tough loss to the Predators.  Such is the reality of playing professional sports.

CBC:  Sens look to maintain playoff position against fading Jets.  The Sens haven’t been playing their best hockey when they need to, although a win over the formidable Pittsburgh Penguins has this team feeling a bit more confident as they look to knock off the Jets and continue their playoff push.

Ottawa Citizen:  Playoff time already for Sens.  Jets fans can empathize with their Sens fan brethren as their team has been in a playoff mode (at home at least) for the last 10 games the Jets have played.

Ottawa Citizen:  Senators this week.  While it is highly unlikely the Jets can catch the Senators, here is a look at the schedule of 7th place Ottawa.

Ottawa Sun:  Sens back in control.  Their owner believes that they need to win 4 of their remaining 7 games to get into the post season.  Tonight’s game in Winnipeg is a critically important test of the Senators consistency.

Ottawa Sun:  Anderson a cut above for Sens.  No rest for the wicked as the saying goes, and it appears that Sens goalie Craig Anderson is being thrown back into a heavy rotation as he is expected to get his 3rd straight start tonight against the Jets.