Game for some action. Calder coup no longer a consideration. Jets firing on all cylinders? Jets earn Bs across board. Local wood carver paying tribute to Winnipeg Jets. Eagles Aliu recalled by IceCaps.

Winnipeg Free Press:  Game for some action.  Chris Mason hasn’t played since he tweaked his groin in that wild Jets 9-8 victory in Philly at the end of October.  He is likely to see 1 game of action during this road trip although coach Noel hasn’t indicated yet which game he will play.  We suspect it will be the Friday night game in Carolina.   Mason spoke about getting back into action following practice yesterday.

Winnipeg Free Press:  Calder coup no longer a consideration.  While he might not be a rookie, Mark Flood despite his lack of NHL experience has been excellent since being recalled by the Jets.  He is 2nd on the team in goals scored by a defenceman, with about 1/2 the number of games played this season than everyone else.  Coach Noel is obviously a fan of Flood’s game as can be heard here, following yesterday’s practice when he spoke with the media.

Winnipeg Sun:  Jets firing on all cylinders?  As the coach said in a response to a question I asked about the team  buying into his system:

No I’m not completely.  That takes times.  It takes 50, 60 games.  Maybe not that long.  I’m comfortable that they are getting what we want to do and I think we are on track for it but I wouldn’t get that comfortable yet.

Winnipeg Sun:  Jets earn Bs across board.  The Jets are slowly climbing the letter grade as they get closer to .500 this season.  A big reason has been the play of goalie Ondrej Pavelec. 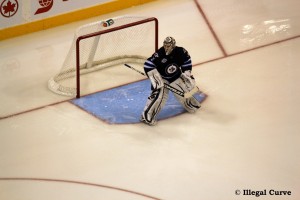 CTV:  Local wood carver paying tribute to Winnipeg Jets.  He spent 250 hours on this project and it is evident in the detail.  Pretty impressive for someone his age.

Illegal Curve: 11/19 Illegal Curve Hockey Show.  For those who missed last Saturday’s epic show, you can catch the first two hours of the three hour show.  If the show had a title it would have been ‘The search for Ezra Ginsburg’.

The Coloradoan:  Eagles Aliu recalled by IceCaps.   Even the Eagles are on a hot streak having won 3 in a row.

Washington Post:  Semin will play; Joel Ward and John Erskine scratched.  Ward overslept and missed team meeting.  It looks like Erskine and Thorburn will have to wait for Round 2 until the next time the Jets/Caps play.

Washington Times:  Capitals not ‘satisfied’ after one win.  The Jets are going to need to weather a storm and hope an early goal might deflate the sails of the Capitals.

CSN Washington:  Rally Balloon now has own T-shirts.  If you didn’t see the game, during the Phoenix @ Washington contest, with the Caps down a red balloon floated over the ice surface and stopped play.  Then once play resumed the Caps scored 4 unanswered goals to win the game.  Now some entrepreneur has decided to take advantage of the red balloon’s sudden fame.

Washington Times:  By dropping gloves, Hendricks gave slumping Caps a chance.  Not sure it was Hendricks fight that sparked the Capitals so much as the red balloon and its mysterious powers.  See above story.