Team believes in self, system. Kane picks Leos, Noel takes Blue. Jets have Bombers backs. Wellwood’s a steal. Jets need to stay out of the box.

Jets next opponent news – Washington Capitals: Semin pays penalty for all his penalties. Capitals find a spark, rally for 4-3 win.

Winnipeg Free Press:  Team believes in self, system.  The next test for this suddenly confident Jets team is to take this act on the road.  The teams they are playing are either scoring hot (Boston – 9 wins in a row) or are heating up (Carolina – 2 wins in a row).

Winnipeg Free Press:  Kane picks Leos, Noel takes Blue.  Nothing wrong with guys from BC supporting the team they grew up cheering for.

Winnipeg Sun:  Jets have Bombers backs.  Two Manitoba guys (Fehr & Meech) vs. three B.C. boys (Ladd, Kane & Festerling).  You can bet there will be some trash talk on the plane.

Winnipeg Sun:  Wellwood’s a steal.  The guy is the third lowest paid forward on the Jets, yet is leading the team in points.  Now that is getting the most out of your players.

Winnipeg Sun:  Jets need to stay out of the box.  It looked like Kane’s three 3rd period penalties were going to come back to bite the Jets, but thanks to the strong play of Ondrej Pavelec, Winnipeg held on for the victory. 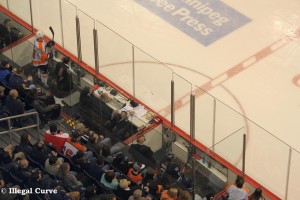 CSN Washington:  Semin pays penalty for all his penalties.  In Boudreau’s system guys have to be held accountable and a message needed to be sent to Alex Semin that it doesn’t matter how talented you are, selfish play that costs the team isn’t acceptable.

Washington Post:  Capitals find a spark, rally for 4-3 win.  Does this comeback victory mean that Washington has turned things around?  Big test coming up against the Jets tomorrow night.