TSN:  Bogosian to meet with Shanahan over Eakin hit.  While the play didn’t merit a penalty on the ice, clearly the NHL saw reason to call a 1 pm hearing with the Jets defenceman.  Do you think he will be suspended for this hit?

Winnipeg Free Press:  Burmistrov sees ice time reduced.   For the first ten games of the season Burmistrov was about the only player coach Noel spoke about in a positive fashion on a consistent basis.  It appears the Jets young gun has fallen out of favour the past couple of games. 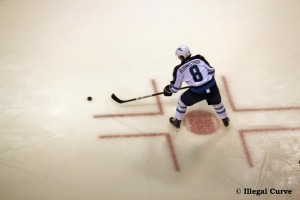 Winnipeg Sun:  Jets Hainsey logs major minutes.  Somewhat surprised that Hainsey played as much as he did (23:34 minutes).  Expected the Jets to bring him back in slowly, but they tossed him into the mix and he played pretty well considering how many games he has missed.

Winnipeg Sun:  Doer brimming with Jets pride.  While he works hard for Canada down in D.C, he is still able to pay attention to events north of the border.

Winnipeg Free Press:  Doer shows Jets, Bombers pride in Washington.  The former Premier of Manitoba (now the Ambassador to the United States) still wears his pride in our province on his sleeve, or in this case his tie.

Brandon Sun (Registration required):  Fehr game to shoulder Jets fans lofty expectations.  His return to the ice hasn’t resulted in any goal scoring but as Shane Hnidy said last night, it sometimes takes longer for a forward to get back into the rhythm of the game after a long absence.

Illegal Curve:  Jets on a Deadline.  Game recaps from all the major newspapers, video highlights and 3 stars.

Illegal Curve:  Illegal Curve Hockey Show ( Hour 3).  We finally have the final hour of the show added to the lineup.  This included visits from the Delaware County Times, Anthony SanFilippo, from ESPN.com & Washington Post, Neil Greenberg. We end this legendary show with a visit from Gary Lawless of the Winnipeg Free Press.

The Telegram:  Aebischer isn’t retired, but hasn’t worked much.  It shows Aebischer’s level of commitment to getting back to the NHL that he hasn’t given up and gone home.  He isn’t seeing a tremendous amount of ice time in St. John’s yet he continues to practice hard for his chance to get back into the lineup.

News & Observer:  Canadiens cuff Canes with shootout win in ‘ugly game’.  Both the Jets and Canes are coming off of a loss.  Should be interesting to see who has the better bounce-back game on Friday night.

Montreal Gazette:  Jeff Skinner still learning.  He is clearly the most dangerous player on this Canes team.