Jets next opponent news – Carolina Hurricanes: Canes seem to be back on track.

Winnipeg Free Press:  Bogosian relieved, Hainsey likely out for Jets.  Too bad Hainsey might not be able to go tonight as he logged a lot of good minutes in the OT loss to Washington.  Of course, perhaps that is why he isn’t available tonight.

Globe and Mail:  Burmistrov, Staal trying to find their games.  Both players need to improve for their team to have any chance of success.

Winnipeg Free Press:  Burmistrov needs ‘coaching’.  Coach Noel was a big backer of Burmistrov for the first dozen or so games of the season.  It is not a big surprise however that the coach is trying to coach his young star.  He wants to harness all that raw talent and that takes coaching.

Winnipeg Sun:  Benched Burmistrov vows to get back on track.  Despite the fact that he only has 2 assists in his last 9 games, he has still been playing a physical game.  The young Jets forward will take the message his coach has sent and hopefully get back on track. 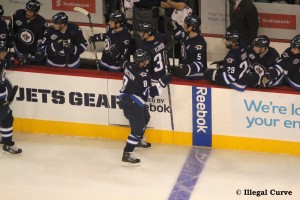 Globe and Mail:  Jets Bogosian escapes suspension.  In case you missed the news, the NHL let the Jets defenceman off the hook (no fine or suspension) for his hit on Saturday night against Cody Eakin of the Capitals.

It is the view of the Department of Player Safety that in spite of the fact that there was contact with the head, when Bogosian committed to the check, he was coming for Eakin’s shoulder and Eakin’s change of direction and opening up after his dump-in just prior to the contact contributes enough that there will be no supplementary discipline.

Winnipeg Free Press:  Bogosian dodges iron fist of Shanahan, practicing 5 on 3, Mason likely starter.  The Jets 5 on 3 was pretty bad the other night so its probably a good thing they practiced it.  Also not a huge surprise that Mason is getting some game action given that tonight the Jets play tonight in Raleigh and tomorrow night in Boston.  As well Ondrej Pavelec has played in 12 straight games, so it is probably a good thing he doesn’t get to a bakers dozen.

Winnipeg Sun:  No suspension for Bogosian.  If you missed the play, here is the video.

Globe and Mail:  AHL thriving again in St. John’s.  Jets fans have experienced the joy of the NHL’s return to Winnipeg, so you should be able to easily understand the emotions that people in St. John’s experienced with the return of AHL hockey to their city.

News and Observer:  Canes seem to be back on track.  Don’t look now but it appears that Jets southeast division rival might have turned things around.  Both the Jets and Canes sit with 20 points (although the Jets have 2 games in-hand) and in a three way tie for 3rd in the southeast, 5 points back of 2nd spot and the Washington Capitals.  Tonight will be a critical game for both teams and the first meeting since the Jets won 5-3 at the MTS Centre on October 22nd.