Jets bench boss provided an update on his two forwards. 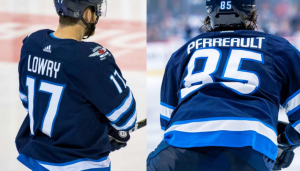 Prior to puck drop in Philadelphia Jets bench boss Paul Maurice held a media availability where he was asked about the status of Adam Lowry and Mathieu Perreault.

With the Jets acquisition of Cody Eakin last night Paul Maurice was asked if this will allow him to move Lowry to the wing:

“He’s still aways away.  When he comes back though he’ll be at 100%.  We’re not going put him in at 75.  There’s less pressure now with Cody here.  We’ll hopefully get him back to speed.  But he’s been off a long time.  He and Matty Perreault have missed some time.”.

“Progressing, working hard.  They’re not on the trip so that tells you where they’re at.  The positive is it is upper-body injuries which means they can skate.  I don’t know how much they enjoy it but they’ll be in good shape when they come back.”