The Winnipegger is reportedly coming back home. 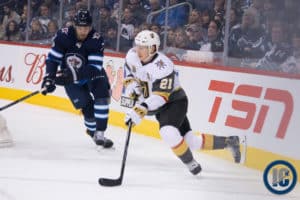 Who says you can’t go home?  Don’t tell that to Winnipegger Cody Eakin who was traded to the Jets via the Vegas Golden Knights according to TSN hockey insider Darren Dreger pending the trade call with the NHL.

Dreger adds that the “Conditional 4th that could go to a 3rd. 2021. If the Jets make playoffs or re-sign Eakin.”

Here are a look at Eakin’s numbers:

Cody Eakin, traded to Winnipeg, is not an NHL-calibre player. He’s below replacement-level in every situation, and his only strength is a very good shot. #GoJetsGo pic.twitter.com/rloLrYN7yo

Jets have confirmed that they have acquired Eakin.

Kevin Cheveldayoff scrum topics: What made Cody Eakin a good fit to pursue?  How important is his versatility (ability to bounce between centre & wing)?  Adding an element of grit/moxy.  Is there an update on Adam Lowry or was this move made independent of his injury situation? How do the two moves he’s made this week impact what he does before Monday’s deadline? What is Eakin’s take on returning home?  What was the timeline of this deal coming together?  Using cap space to acquire assets.  Making “hockey deals”.