An update on the veteran forward who left last night’s game. 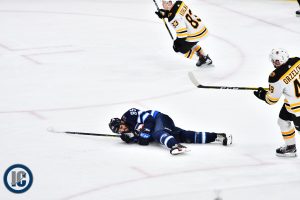 It was tough for the Jets to see their teammate down on the ice, then heading down the tunnel and then to later find out he would not return for them in their game against Boston on Friday.

After the game coach Paul Maurice didn’t have an update but a day later and following the win over the Blues he was able to advise that the veteran winger will miss two weeks with an upper-body injury.