Reaction from the Room: Jets 5 Blues 2 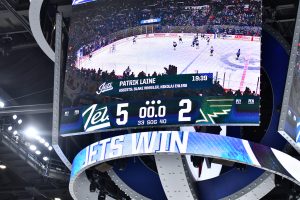 The losing streak is officially over as the Jets beat the defending Cup champion Blues 5-2 tonight in Winnipeg to improve to 26-23-4 on the season.

Coach Maurice:  Did he feel his team picked up where they left off from last night?  What did he like from his third line?  Did he feel the team handled the day the right way today?  Update on Mathieu Perreault?  Thoughts on Connor Hellebuyck?   The start of the hockey game.  Hockey Gods.  How important was it, given everything this team has gone through, for this game not to get tied up?  Play of Sami Niku.

Coach Berube:  His assessment of the road trip.  The fine line between winning and losing.  Thoughts on their 2nd period.  Trying to get back into the game after falling behind.  Thoughts behind changing up the lines.  Might he do more switching?

He was injured in the game against the Bruins last night but Jets bench boss didn’t have an update on Mathieu Perreault until after tonight’s game against the Blues.  He indicated that the veteran winger would be out at least two weeks.

The Jets have a practice scheduled for Sunday at 12 noon.  You can kick start your Saturday with the AM Jets papers which go live at 7 am on illegalcurve.com.