Note:  A big weight was lifted off the Jets shoulders last night as they skated to a 5-2 win over division rival St. Louis here in Winnipeg.  Following the game Jets bench boss Paul Maurice provided an update on Mathieu Perreault who left the game the night before against Boston.  He will miss two weeks.  Today the Jets are scheduled to hit the ice for a practice at 12 noon.  Be sure to check back for our Practice Report.

Note III:  The Moose concluded their road trip last night in Chicago losing 5-2 in a tough game against their division rival Wolves.  They also lost JC Lipon who had to be helped off the ice.  His veteran presence will be missed by the club.  They travel back to Winnipeg today and will kick off a week of practice before they begin six straight at home.

The Athletic Winnipeg: On Jack Roslovic, Andrew Copp, and how Winnipeg’s secondary scoring affects the trade deadline and two playoff races. (Paywall).  It is certainly shaping up to be an interesting February.

Winnipeg Sun: Jets halt losing streak with big win against Blues. The most important takeaway from the Jets win is for fans to not prematurely start a wave. Or better yet don’t do the wave at all. Check out Scott’s recap. 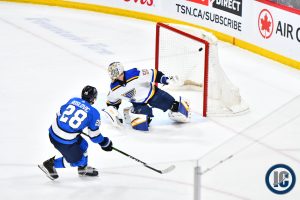 Winnipeg Free Press:  Jets snap five-game losing streak with 5-2 win over Blues.  (Paywall).  It was a massive win for the Jets.  Mike recaps the action from his spot inside Bell MTS Place.

St. Louis Post-Dispatch:  Blues almost climb out of 3-0 hole, fall to Winnipeg 5-2.  Read about the game from the perspective of a writer who covers the Jets opposition.

TSN: Hellebuyck was called upon and he was terrific against Blues. Connor Hellebuyck was needed by the Jets for them to finally break out of a five-game slump and he didn’t disappoint against the Blues. Craig Button discusses the contribution of Winnipeg’s netminder and how well of a job Paul Maurice has done to keep his team focused and positive despite playing with a short handed blue line.