Perhaps Jets fans with Bogosian jerseys can bring them out of retirement. 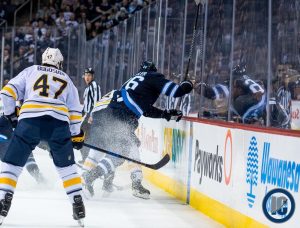 If you are reading that headline and scratching your head thinking you’ve been time warped back to 2014-15 when defenceman Zach Bogosian was still a member of the Jets you have not.  But according to hockey insider Darren Dreger the Jets are one of several teams who might be in line for the services of the 3rd overall pick by Atlanta back in 2008.  He spent three seasons with the Thrashers and then another four with Winnipeg before the big trade to Buffalo in February of 2015.

Things have not gone well for the rugged defenceman of late who has only played 19 games with the Sabres this season before being put on waivers to be assigned to the AHL on February 14th.  He refused to report to Rochester and Buffalo suspended him and thereafter put him on on unconditional waivers on Friday with the intention of terminating his contract.

Assuming Bogosian clears unconditional waivers today, I expect he will wait until Monday to decide where he wants to play for the remainder of the season. Toronto, Pittsburgh, Carolina and Winnipeg are among the strong contenders.

Hard to see the fit here in Winnipeg.

After mentioning the Jets on Saturday Dreger sent out a tweet on Sunday saying “Bogosian is still considering options and Carolina, Pittsburgh and Arizona appear to be most interested. It’s believed Toronto’s interest has cooled a bit. Calgary, SJ and Boston also among the tire kickers.”