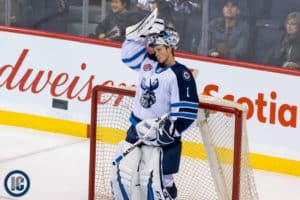 In total Comrie has played three NHL games with Detroit (started two), backed up a few games between the Red Wings and Coyotes and played four games on a conditioning stint when he was with Arizona with their farm club in Tuscon.

With the news today that he is back on waivers might the Jets claim him to augment their organizational depth at the goalie position?  Of course it won’t be as simple as claiming him and assigning him to the Manitoba Moose as Ken illustrates:

There is little doubt #NHLJets would have interest in claiming Eric Comrie off waivers to add G depth for organization, but since he’s been traded since being claimed off waivers by #Coyotes they couldn’t send him directly to #AHL if their claim was successful

Some might push back thinking this would limit second-year pro Mikhail Berdin, who has taken over the number one spot with the Jets AHL club.

But you have to ask the question: What happens if one of the NHL guys go down? Do you want Berdin in the NHL now? And what does that do for your AHL team if Berdin was in the NHL? A claim of Eric Comrie doesn’t put him ahead of Berdin but it does give them depth.

It will be interesting to see what happens tomorrow at 12 noon eastern time.  I suspect that regardless of what the Jets do or don’t do, that Comrie will likely not make it down to the Wings AHL affiliate in Grand Rapids.

Jets have claimed Comrie off waivers.