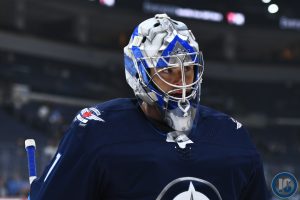 It has been an unusual season for goalie Eric Comrie.  He signed a two-year deal with the Jets this past summer and following training camp was assigned, as was expected, to the Moose.  It was thought he and Mikhail Berdin would form a dynamic goalie tandem for the Jets AHL club.

But the Arizona Coyotes swooped in and made a waiver claim picking up the Edmonton/California product to kick off the 2019-20 season.  He would be in limbo however as the club had Antti Raanta signed for one season after this one and maybe a day after they picked up Comrie the team announced they had signed Darcy Kuemper to a two-year extension.  Aside from a conditioning assignment with their AHL affiliate in Tucson and one or two back-up appearances it didn’t appear that Comrie was going to get his shot in the desert.

On November 30th he was traded for the first time in his pro career as the Coyotes announced a deal to send him to Detroit for defenceman Vili Saarijarvi.

Fast forward ten days and Wings head coach Jeff Blashill announced that Eric Comrie would make his first start of the 2019-20 season against his old club tonight in Winnipeg.

He played five games for the Jets (over three years) and 183 between the IceCaps and Moose. He remains the AHL franchise leader for games played (183) and saves (5,156).

Jets captain Blake Wheeler was asked about Comrie today following the optional morning skate “He’s a guy everyone really liked around the room. Everyone’s been rooting for him. This will be the first time since I’ve known him that nobody is rooting for him. We are obviously excited for him to get the opportunity.  Hopefully he can stick there and hopefully we can make it tough for him tonight.”.

Bench boss Paul Maurice was also asked during his availability about the former prospect tender “I just wish I could be that happy.  But this guy might be the nicest guy on the face of the earth.  Hard working, will stay out on the ice all day, take 2000 shots.  How you doing Eric?  ‘Great, I had a great day today’.  He’s just a wonderful, wonderful personality.  I’m really happy he’s getting the chance to be back in the NHL.  I wish the best for him after a couple of days from now, I really do.  There’s a guy we should all be pulling for.  He’s top five best guys ever and if you know him you know I’m not exaggerating.”

You can expect a warm welcome for the long-time goalie prospect when his name gets announced as starter for the Wings.

But as I said earlier on twitter who woulda thunk it that Comrie’s first NHL start of this season would come against his former club?

Eric Comrie spoke after it was announced he was starting.