Note: Puck drop is at 7:00 pm CST tonight for today’s game against the Red Wings.  After the game, be sure to check us out for all the post-game reaction.

Note II:  Former Jets/Moose goalie Eric Comrie will make his first NHL start this season against the club that drafted him.

Detroit News:  Red Wings gladly welcome back two key veterans to lineup.  Learn more about the Jets opposition from a writer that covers the Red Wings.

Winnipeg Sun: Former Jets prospect and Moose goalie Comrie gets start for Red Wings in Winnipeg.  So unusual that of all the places for him to make his first NHL start this season it comes against his former team.

Illegal Curve: Jets vs. Red Wings pre-game report. The Jets held an optional skate this morning followed by a media availability before they take on Detroit which takes place at 7:00 pm CDT. Check out the projected lines and D pairs and hear from captain Blake Wheeler.

TSN:  Can Winnipeg keep up winning pace?  The Jets had a bunch of turnover entering the season, but have found themselves in the race for the Central Division title. Can they keep up their winning pace? Sara Orlesky and Ken Wiebe discuss this and more in Jets 3-in-3.

Sportsnet: Morrissey and Jets having a lot of fun winning this season. Josh Morrissey and Blake Wheeler discuss what’s allowed the Winnipeg Jets to be so successful 30 games into the season, and why the entire group has bought in and are having a blast winning together. 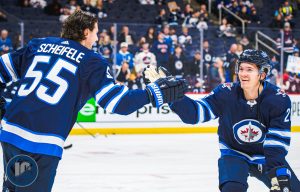 Illegal Curve:  Coach Maurice pre-game scrum.  Topics included – Thought behind sending Mason Appleton to the AHL.  Bourque in?  The new look 4th line.  What led him to believe that Neil Pionk could have this type of impact?  Does he see Nikolaj Ehlers, Kyle Connor and Patrik Laine taking leadership roles?  When he thinks of Eric Comrie what is the first thing that comes to mind?  The value of a guy who wants the puck on his stick when the game is on the line.  Adam Lowry’s evolution.  The Jets playing as a five man unit.  Did he feel guys bought in right away for what the team would need to have success?