Coach Paul Maurice will remain behind the Jets bench as he has signed an extension. 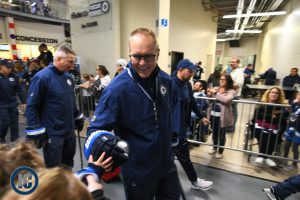 There has been plenty of talk/speculation about the status of Winnipeg Jets head coach Paul Maurice who was reportedly in the final year of his deal with the Jets.  He was hired back on Jan 12, 2014 as just the second coach in the history of the relocated and reborn Jets franchise.

At the Heritage Classic in Regina back in October Elliotte Friedman asked GM Kevin Cheveldayoff about his coach saying he understood Maurice to be in the last year of his contract and asked when would the team make a decision as to a next step. “I don’t really discuss much about coaches’ contracts.  Paul Maurice is a great coach and for us I think he’s a really good fit.”

Perhaps it is unsurprising that with the speculation over his future he was even linked to the coaching vacancy in Seattle although the Jets bench boss quickly dismissed this rumour when he was asked about it.

Today Darren Dreger of TSN is reporting that as part of the Hall of Fame Luncheon for Randy Carlyle and Thomas Steen, Jets owner Mark Chipman is going to announce the extension.

The Jets have made it official about eight minutes later saying it is a multi-year extension.  You can read about it here.

According to Elliotte Friedman it is a three year extension.

There will be a media availability with coach Maurice and GM Kevin Cheveldayoff following practice.  You can listen to Maurice’s here and Cheveldayoff’s here.

According to Pierre LeBrun “Hearing that Paul Maurice’s much-deserved extension is three years at a $3-million US salary, which puts him with a few other coaches in the same range in the top third. Could have been more, to be honest, but he’s clearly happy in Winnipeg.”