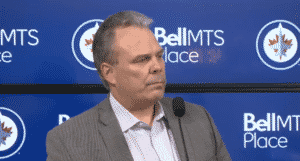 Following the scrum with Jets head coach Paul Maurice it was Jets GM Kevin Cheveldayoff’s opportunity to address the news that he had extended his head coach.

Kevin Cheveldayoff scrum topics:  Why now for the extension?  How has he seen him evolve as a coach and why does he continue to be a fit for the organization? How important is continuity for a head coach (which is rare these days)?  What has stood out to him from Paul Maurice this season?  What goes into his coaching evaluation?  On how players treat the coach.  Are his contract and Paul Maurice’s end at the same time?  Is his longer?  Has the need to “shake things up” crossed his mind?  Did he get the temperature of the room before extending the coach?  Anything new with the assistant coaches?  Anything new about Dustin Byfuglien situation?  Are they working towards a resolution?  Has his approach changed this season to trade deadline?  What was it like for him to see what happened to Jay Bouwmeester?

Hasn’t had any discussions with the assistant coaches.

No news on the Dustin Byfuglien situation.