Name of Jets bench boss mentioned in connection to Seattle.

At the Heritage Classic back in October when GM Kevin Cheveldayoff was chatting with the panel ahead of the game. Elliotte Friedman asked him about his coach saying he understood Maurice to be in the last year of his contract and asked when would the team make a decision as to a next step.  Not surprisingly the Jets GM danced around it as he usually does when it comes to the topic of contracts simply saying  “I don’t really discuss much about coaches’ contracts.  Paul Maurice is a great coach and for us I think he’s a really good fit.” 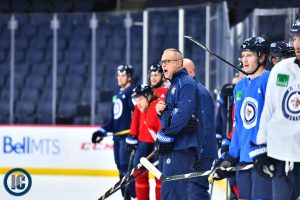 Jeff Marek and Elliotte Friedman were chatting on the 31 Thoughts Podcast which was released on Thursday and during the end of show segment where listeners ask questions Marek read a question to Friedman about the newest franchise in Seattle (around 01:24) “When will more news come down the pipe about Seattle’s new expansion franchise?”

Friedman replied with something of interest potentially to Jets fans “……Coach might not be for another year. I’ll tell you this, I’ve got some guys who think it’s going to be Paul Maurice.”

When Marek pressed him “Oh, you do, do you?” the hockey insider disclaimed it by saying “Not me, but I’ve got some guys who think it’s going to be Paul Maurice.”

So Friedman disclaims it as his own news but still chose to share it.  Make of that what you will.

Maurice does have familiarity with Seattle GM Ron Francis as Maurice coached Francis from the 1998-99 season until 2003-04.

Coach Maurice is in his sixth full season as Jets bench boss after taking over for coach Claude Noel back in the 2013-14 season.