Note:  The Jets run came to a halt last night as the Rangers came to town and left with a clean two points after their 4-1 victory over Winnipeg.  Today the Jets have a scheduled day off.  They’ll be back on the ice on Thursday for a practice as they get ready to continue this homestand when they welcome the Sharks to town.

Note III:  The Moose have had three days of practice and will take on the IceHogs tonight as they kick off a pair of games against their division rival at Bell MTS Place.  Puck drop is at 7 pm.

The Athletic Winnipeg: Jacob Trouba gets what he expected: Mix of boos, cheers greet former Jets defenceman. (Paywall).  Ken looks back at last night and all the way back to the beginning with Trouba.

Winnipeg Sun: Jets’ winning streak comes to an end with loss to Rangers. All good things must come to an end and yesterday that’s what happened to the Jets run of 4-0-1 as the NYR took a late lead in the opening period and didn’t look back. Scott has more. 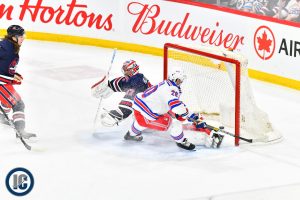 Winnipeg Sun: Carlyle, Steen praise community as pair inducted into Jets Hall of Fame.  Lots of love for Winnipeg which I suspect will continue at today’s Hall of Fame luncheon.

Winnipeg Free Press: Jets drop out of playoff picture with 4-1 loss to Rangers. (Paywall).  Mike recaps the game from his spot inside Bell MTS Place.

Winnipeg Free Press: Returning team had to be Jets. (Paywall).  Not even sure how anything else was even considered quite honestly.

Winnipeg Free Press:  Jets 1.0 legends enter Hall.  (Paywall).  Listening to the media availability from Randy Carlyle it was impressive to hear him talk about his plans to make a like here in Winnipeg.  These two are iconic members of those Jets 1.0 teams.

New York Post: Igor Shesterkin sparks Rangers after returning from concussion scare. Quite a first NHL road start for the Blueshirt netminder.  And since it was an ankle injury perhaps concussion should have air quotes around it.

New York Post: Jacob Trouba gets icy welcome in return to Winnipeg.  There was a nice gesture by the Michigan-born Trouba to sign and give a young Jets fan a stick during warm-up.

Sportsnet: How motivated is each Canadian NHL team to buy at trade deadline?  As you’d expect he is unsure of what to expect from the Jets.