Reaction from the Room: Jets 5 Senators 2 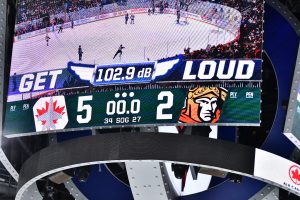 The Jets kick off the homestand with a big team 5-2 win. Lots of contributions including a Patrik Laine hat trick. Jets improve to 28-23-5 on season and are 3-1-1 since All-Star/Player breaks.

Patrik Laine’s eight hat tricks are still three back of Ilya Kovalchuk who holds the franchise record with 11. Kovalchuk did it in 594 games with Atlanta. Laine has done it in 291 games with Winnipeg.

Kyle Connor with the hat trick of assists in today’s game which gives him 30 on the season. Second consecutive season he has hit the 30 assist (or more) mark.

Neal Pionk scored his sixth goal of the season which tied his career high he set last season. And he did it in 17 fewer games this time around. He also hit the 30 assist mark for the first time in his career.

Coach Maurice:  What Patrik Laine did defensively on his hat trick goal.  Scoring from different areas.  What did he see in Neal Pionk’s play?  Was the scrap a way to wake things up in a sleepy afternoon game?  Does it feel like its been a month since they’ve had back to back wins?  What did it mean for Laurent Brossoit to pick up the win?  Emphasis on shots from the point.  Shots to the point/drives to the middle and whether they are related.  Ehlers coming out of the penalty box.

The Jets will be right back into it on Sunday when they take on the Chicago Blackhawks here at 6 pm.  You can kick start your day with the AM Jets papers which go live tomorrow at 7 am on illegalcurve.com.