A look at the game 56 projected lineups and pre-game audio. 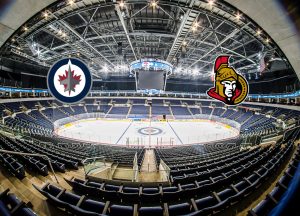 The Jets have gone 2-1-1- since their All-Star and Player break and will play six straight at Bell MTS Place starting this afternoon against the Senators.  Ottawa limps into today’s action having gone 2-3-5 in their last 10 games and are just 6-15-5 away from our nation’s capital.

Since it is an afternoon game there won’t be a morning skate and no pre-game availability with Jets bench boss Paul Maurice.  You can hear what he had to say from his availability on Friday.

Puck drop is at 1:00 PM CST.  Be sure to head over to illegalcurve.com following the game for a recap of the action which includes post-game audio from the Jets room as well as from Coach Maurice.