Note:  The Jets kicked off this critical six-game homestand off on the right skate with a 5-2 win over the Senators on Saturday afternoon.  It will be an even bigger game tonight as they take on a Chicago team that sits three points behind Winnipeg but with two games in hand.  There won’t be a morning skate but the Jets will hold a media availability at 10:30 AM so be sure to check back for our pre-game report.   Puck drop is at 6 PM.

Note II:  The Moose had Saturday off after they split the first pair of games with the Wolves which kicked off this six-game homestand for Manitoba.  Today they will practice at 11 AM as they get ready for a pair of games during the week against Rockford starting on Wednesday night.

Winnipeg Sun:  The ascension of Patrik Laine continues.  A good Sunday read from Scott on the Jets winger.

The Athletic Winnipeg:  Patrik ‘Hat Trick’ Laine and how Winnipeg’s win against Ottawa could quiet some tired tropes about the team.  (Paywall).  Murat with some insight into the Finnish sniper and how his hard work on his complete game isn’t a recent phenomenon.

Winnipeg Sun: Big Matchup and 5 Keys to the game. Paul’s big matchup is goalies Connor Hellebuyck vs. Robin Lehner. His five keys include: 1) Heavy legs vs rust. 2) Who’s got the momentum? 3) Power surge. 4) Same attitude. 5) A double dose of cliche.

Winnipeg Sun:  Red-hot Laine leads Jets over Sens.  Eight goals in his last eight games including a hat trick yesterday afternoon as the Finnish sniper continues to evolve in his gameplay in this his fourth NHL season.  Paul recaps the action. 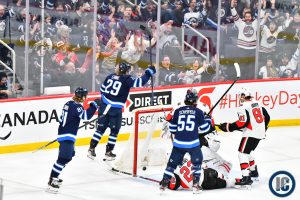 Winnipeg Free Press:  Brossoit back in win column.  While it was a good team win it was probably most important for the Jets backup who hadn’t had a victory since December.  And he may get a steak dinner from Neal Pionk out of it.

Winnipeg Free Press:  Laine leads Jets to victory.  (Paywall).  The play he may defensively on his third goal perfectly illustrated the maturity in Laine’s game.  Mike recaps the action from his spot inside Bell MTS Place.

Ottawa Sun:  Senators extend winless streak to 5 with loss to Jets.  Get insight into the game in Winnipeg from the perspective of a beat writer that covers the Jets opposition.

Topics: Jets Week in Review, Dustin Byfuglien & the Jets heading to mutual termination of his contract, Have the Jets trade deadline plans changed now that the Byfuglien issue appears to be resolved, The impact of the Harkins-Copp-Roslovic line, Jets/Senators Preview

Topics: The upcoming 9 games for the Jets, The return of Jacob Trouba to Winnipeg, The Leafs acquire Jack Campbell and Kyle Clifford from the LA Kings for Trevor Moore and draft picks, Latest TSN Trade Bait Board