A look at the game 57 projected lineups and pre-game audio. 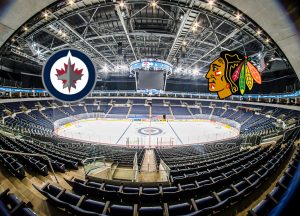 The Jets kicked off this homestand with a big 5-2 victory over the Senators on Saturday afternoon.  However they will face a stiffer test tonight when Chicago visits as the Hawks have gone 6-2-2 in their last 10 games and sit just three points back of Winnipeg with two games in hand.  The Blackhawks have also been off since Wednesday.

No skate for the Jets this morning as they played yesterday but they will hold a media availability at 10:30 AM.  For now the lines and D pairs are based on last game with the only change being Connor Hellebuyck in net.

Coach Maurice confirms it will be the same lineup as they used yesterday against the Senators except Connor Hellebuyck is in net.

Coach Maurice:  Lineup?  What has he seen from Nathan Beaulieu since his return? On being in a playoff spot and being able to use that as a sale pitch to the players.  How do you ward off exhaustion playing the current style? On Patrik Laine’s progression.  Has he seen less dips in Laine’s confidence?  The focus on Patrick Kane.

Puck drop is at 6:00 PM CST.  Be sure to head over to illegalcurve.com following the game for a recap of the action which includes post-game audio from the Jets room as well as from Coach Maurice.