Reaction from the Room: Jets 5 Blackhawks 2 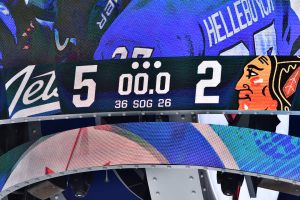 To quote Will Ferrell the Jets are going streaking. They pick up the 5-2 win over the Hawks and have won the first two of this six game homestand. Jets improve to 29-23-5 on season and are 4-1-1 since All-Star/Player breaks.

Kyle Connor scored his team leading 27th goal of the season, which came shorthanded and the empty netter gave him 28 on the season.

Patrik Laine also had an empty netter which was his 24th goal of the season and his ninth goal in the last nine Jets games.

Andrew Copp was a beast setting up the Connor shorthanded goal and also scoring the game winner.

Coach Maurice:  Was that game an example of what happens when you stick with it?  Was he more impressed by the Copp pass shorthanded or the determination on the game winner?  Did the Nathan Beaulieu fight spur on the bench?  On Beaulieu being a great teammate.  On Beaulieu sacrificing himself for the team.  Is Copp generating differently when he is in the middle.  Copp’s level of preparation.  On players not losing their mind when chaos is erupting around them.  Putting Copp, Wheeler and Ehlers together when they were down 2-1.

The Jets have an off day on Monday  They will continue this homestand on Tuesday when they take on Jacob Trouba, Brendan Lemieux and the New York Rangers.  You can kick start your day with the AM Jets papers which go live tomorrow at 7 am on illegalcurve.com.