Note:  The Jets and Hawks did battle on Sunday night and while it didn’t begin as the home side would have liked they came back to pick up a 5-2 win and pick up an important two points.  They currently sit in the first wild card spot in the Western Conference four points back of Dallas who are third in the central although their divisional rivals from Texas have two games in hand.  The Jets are off today.  They’ll be back on the ice on Tuesday when they welcome Jacob Trouba, Brendan Lemieux and the New York Rangers to town.

Note II:  The Moose practiced on Sunday and will again this morning at the IcePlex at 11 AM as they get ready to face the IceHogs on Wednesday night in a critical central division matchup.

The Athletic Winnipeg: Versatile forward Andrew Copp developing game and reputation. (Paywall).  Ken wrote about the star of last night’s game.  In it he wonders what happens when the Jets get Adam Lowry back.  Will Copp stay in the middle?

Winnipeg Free Press: Jets down Blackhawks with five straight unanswered goals. (Paywall).  With the way the game began just 15 seconds into the contest and then about 10 minutes later it wasn’t looking good for the local NHL squad but this team showed some of that 2017-18 fire.  Mike recaps the action. 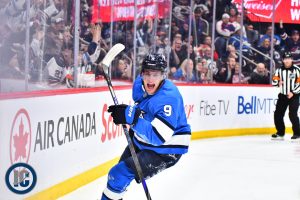 Chicago Sun-Times: Blackhawks’ atrocious power play sparks meltdown loss to Jets.  Read about the game from the perspective of a writer that covers the Jets opposition.

Winnipeg Sun: Copp scores game-winner as Jets down Blackhawks.   Copp is without questions one of, if not the best interview on the team, as he will give you an insightful and honest assessment of the play with a dose of self–deprecating humour including a joke about his laces costing the Jets a win.

Winnipeg Sun:  The ascension of Patrik Laine continues.  A good read from Scott on the Jets winger.

TSN:  Copp delivers on offence yet again for Jets in comeback win over Blackhawks.  Andrew Copp has always been known for the defensive part of his game but the Jets have been benefiting from his offence, which has brought the team three game-winning goals in their last five games. Sara Orlesky has more.

Topics: Jets Week in Review, Dustin Byfuglien & the Jets heading to mutual termination of his contract, Have the Jets trade deadline plans changed now that the Byfuglien issue appears to be resolved, The impact of the Harkins-Copp-Roslovic line, Jets/Senators Preview

Topics: The upcoming 9 games for the Jets, The return of Jacob Trouba to Winnipeg, The Leafs acquire Jack Campbell and Kyle Clifford from the LA Kings for Trevor Moore and draft picks, Latest TSN Trade Bait Board