Reaction from the Room: Jets 3 Capitals 0 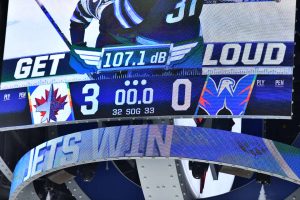 On a night where a win was a must, the Jets best players performed as such and deliver the key victory, improving the team’s record to 33-27-6 on the season.

Patrik Laine was forced to leave the game and would not return after blocking a shot.

Coach Maurice:  Status of Patrik Laine.  Managing the game without Laine.  Scoring the first goal of the game.  Nathan Beaulieu blocking shots and playing big minutes.  How does he feel about the direct vs indirect chances.  Play of Mason Appleton.  Jack Roslovic dropping onto the power play.  Mark Scheifele on the Jets second goal.  Play of Anthony Bitetto.  Play of the Copp line.

Coach Maurice confirmed that there was nothing showing on any of the tests and nothing was broken for Patrik Laine and he will make the trip to Edmonton.

The Jets will hold a media availability on Friday in Winnipeg at 11:15 AM before they head to Edmonton for a one game road trip out west.  You can kick start your day with the AM Jets papers which go live at 7 am on illegalcurve.com.