Note:  The Jets wrapped up their home and home series with the Capitals last night in Winnipeg in a game which saw the home team pick up a huge 3-0 win which allowed them to take three of four points from Washington.  Today they are scheduled to have a media availability at Bell MTS Place before they head out west for a one-game road trip to Edmonton for a game tomorrow night.  Be sure to check back for the Practice Report for the latest news and audio.

Note II:  The Moose are probably thinking TGIF as it means the final day of practice for them before they get a chance to take some points from their longtime rival Chicago in a pair of matinees here in Winnipeg this weekend starting on Saturday at 2 pm. 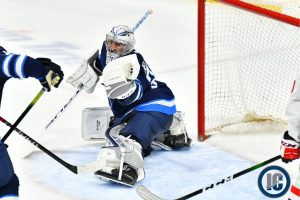 Winnipeg Free Press:  Kovalchuk has fond memories of being a Thrasher.  (Paywall).

TSN:  From Thrashers to Jets, Ovi has dominated the ATL/WPG franchise in his career.  It hasn’t seemed to matter whether they were the Thrashers or now the Jets, playing in the old Southeast Division or now the Western Conference, Alex Ovechkin has always seemed to find his way on to the scoresheet when these teams play. His 48 goals against the franchise is tied for his highest total vs. any single opponent. Sara Orlesky has more.