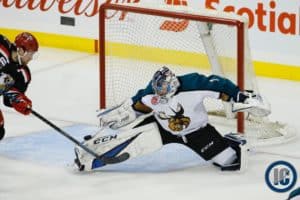 As those who follow me know I thought Eric Comrie was a very competent goalie, especially at the AHL level.  I’ve watched almost every game he has played as a pro since Winnipeg drafted him back in the 2nd round of the 2013 NHL Draft and he continued to improve year after year.  He faced the second most shots in the AHL last season and was the team MVP.  He was placed on waivers on Monday and claimed by Arizona on Tuesday.

Today the Moose put out this video montage and despite the fact that I’ve seen most of these saves live some of them (especially the sequence against Grand Rapids) had me scratching my head as to how the puck didn’t cross the line.

What can we do but say, thank you @ericcomrie1 ? pic.twitter.com/EuKl9bdHJx

The Coyotes are interesting in that they just signed Darcy Kuemper to a two-year extension this week and still have Antti Raanta under contract for this year and next. Raanta is down with their AHL franchise in Tucson for a conditioning stint but when they bring him back up does that mean Comrie will be put back on waivers? If so, do we see a similar situation to last year when Marko Dano was claimed by Colorado, then put on waivers by the Avalanche and then re-claimed by the Jets.