Jets on a Deadline: Jets versus Predators 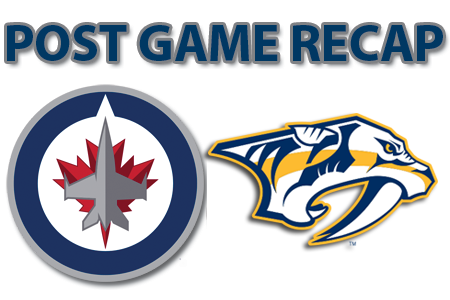 Winnipeg—Waiting is the hardest part, or so the song goes, and Winnipeg hockey fans will find that out the hard way, as they wait eight long days until the regular season gets underway on October 9th.

Before that, the Jets had one final piece of on ice game action, and that was Friday night versus the Nashville Predators.  The Predators are an interesting opponent for the Jets, as they assemble a roster in a manner very similar to how the Jets are expected to operate—strong scouting resulting in strong draft classes, well coached and a cost-conscious team who spends in the middle of the salary cap range. Both teams also have their scoring difficulties, and that was very apparent in a first period that featured a lot of action in the neutral zone, but not a lot of action in terms of scoring chances and results on the score-sheet. 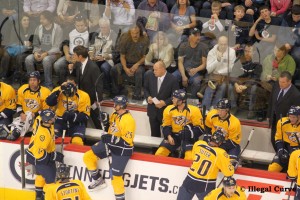 The Predators opened the scoring after an offensive zone face-off win resulted in a solid shot on net from the point and the rebound managed to evade both Jets defenders, who also failed to pick up the forward who was parked in front of the net. Cal O’Reilly zipped it past a helpless Ondrej Pavelec and it was 1-0 for the boys from Music City, USA.

The second period began with a scrap 90 seconds in as Tanner Glass tested his mettle against Nashville goon Zach Stortini. A respectable effort by both gentlemen resulted in them sitting and contemplating their actions for 5 minutes each. An ensuing Jets powerplay came up empty but did provide the team with a momentum boost as they controlled the puck well on the powerplay and demonstrated an impressive forecheck in the couple of shirts following. The hard work paid off at the 5:57 mark of the 2nd period, as, after a neutral zone turnover, Andrew Ladd knocked a rebound past Anders Lindback knotting the score at one. Assists on the goal went to Bryan Little and Blake Wheeler. That was the end of the scoring in the 2nd period, a period dominated by the Jets, who out-shot the Preds by a 16 to 3 margin. 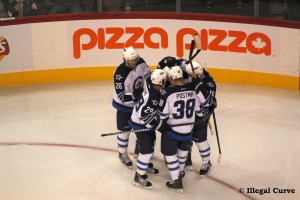 The Predators broke the dead lock at the 7:28 mark of the 3rd period with a powerplay goal by David Legwand, assist to Marrias Ekholm. Despite being down 2-1, the Jets controlled the entire play and their just rewards were achieved at the 13:07 mark on a powerplay goal by Wunderkid Mark Scheifele, assists to Patrice Cormier and Johnny Oduya. The phone booth was rocking and would do so into the first overtime game in Winnipeg in over fifteen years.

The four on four overtime created exactly what you would expect from a situation with four per side on the ice—offense and scoring chances. While it may be gimmicky, there is no denying the excitement that a 4 on 4 overtime period creates. End to end rushed by both sides failed to result in a goal being scored, meaning the game would be decided by the gimmickiest of all the gimmicks—the shootout.

The Jets sent Blake Wheeler up first to shoot, and despite a nifty move, the 6 foot 6 frame of Preds goalie Anders Lindback kept the puck from hitting the twine. First up for the Predators was Cal O’Reilly and he went glove side on Ondrej Pavelec for what turned out to be, after Lindback stopped Tim Stapleton and Bryan Little, the shootout winning and game winning goal.

Join us tomorrow from Noon – 3 PM on Sports Radio 1290 and www.illegalcurve.com for the Illegal Curve Hockey Show, where we will recap the Jets-Preds game and provide our comprehensive preview of the entire National Hockey League Season