The Jets hit the ice tonight in their final exhibition game of the pre-season when they take on the Nashville Predators at the MTS Centre. 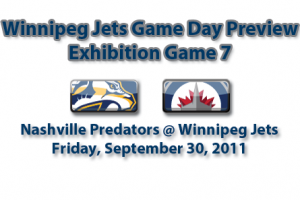 Where: MTS Centre in Winnipeg, Manitoba

The Story: The Winnipeg Jets close out their pre-season tonight with a home game against the Nashville Predators, who defeated the Jets 4-3 last Saturday on a controversial kick-in goal by Patric Hornqvist.

The Jets trimmed their roster down to 36 players on Tuesday (including injured players) and will need to get down to 23 players before they declare their roster before October 9th’s home opener against the Montreal Canadiens (not including injuries ie. Eric Fehr).

Perhaps the biggest decision for the Jets management and coaching staff will be whether to sign 2011 7th overall pick Mark Scheifele to an entry level contract. Scheifele has been simply outstanding during the pre-season, registering 3 goals and 4 assists in four games and displaying a mature game despite his age. There is no shortage of other forwards who are in contention for forward roster spots including Carl Klingberg, Jason Gregoire, Patrice Cormier and Troy Bodie.

For tonight’s game, expect Tobias Enstrom and Johnny Oduya to be in the line-up. Dustin Byfuglien is suspected to be nursing an injury and is not expected to suit up. Enstrom and Oduya did not play in Wednesday night’s game against the Carolina Hurricanes; instead the team opted to dress “bubble players” Brett Festerling, Derek Meech and Randy Jones. There is really only one spot to win on defense and it is between Meech and Jones for the last spot, with 22-year-old Paul Postma having an outside shot.

Post-Game Recap: Jets calm the Hurricanes 3-1
Jets on a Deadline: Jets versus Predators