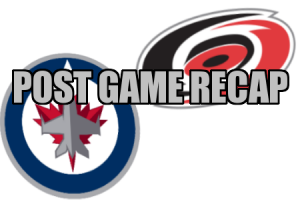 The Winnipeg Jets scored three unanswered goals in the third period to defeat the Carolina Hurricanes 3-1 Wednesday night in front of a pre-season sellout crowd at the MTS Centre.

Despite outshooting the Hurricanes 25-13 through two periods of play, the Jets waited until the third and final frame to get on the scoreboard when 20-year-old sniper Evander Kane tied the game up with a power play marker. Power-forward Blake Wheeler scored 64 seconds later on a stunned Brian Boucher and the complexion of the game had instantly changed. Kane added an empty-net goal with 32 seconds left in regulation to insure the victory for the Jets, who improved their pre-season record to 3-3-0.

Carolina’s lone goal came from ex-Toronto Maple Leafs forward Tim Brent, who scored on a breakaway in the second period.

It was a gutsy win for the Jets, who chose not to dress top defensemen Tobias Enstrom, Dustin Byfuglien or Johnny Oduya in place of Derek Meech, Brett Festerling and Randy Jones, three players who are competing for the 6th and 7th defenseman spots on the team’s opening day roster. All three players were solid on the night and could make Head Coach Claude Noel’s decision on who to cut tougher over the next few days.

At forward, 2011 1st rounder Mark Scheifele had a strong game and displayed great poise and vision on the ice, showing yet again that he is comfortable playing with elite players, specifically Evander Kane on this night, one of the speedier forwards on the team. Scheifele had several chances to score but was unable to beat Boucher. Scheifele assisted on Kane’s empty-net goal and now has seven points in four pre-season games.

Other forwards for the Jets who stood out (in addition to Kane, Wheeler and Scheifele) were Patrice Cormier and Troy Bodie. Cormier made a beautiful pass on Kane’s first goal and Bodie continued to make an argument for himself as a gritty 4th line energy player.

Goalie Chris Mason made 17 saves on the night for the Jets while the much busier Boucher made 35 saves for the Hurricanes.

The Jets have one more pre-season game coming up on Friday, September 30th at home against the Nashville Predators before they wrap-up training camp next week.