The Hurricanes invade the River City for the 2nd meeting between these two clubs in less than a week. 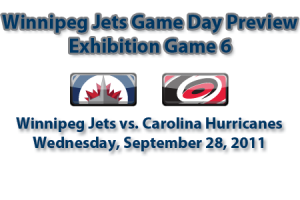 Where: MTS Centre in Winnipeg, Manitoba

The Story: The Winnipeg Jets play their second ever pre-season game at home tonight at the MTS Centre when the Carolina Hurricanes come rolling into town. The Jets returned home Tuesday after salvaging a three games-in-three-nights road trip with a 3-1 victory over the Ottawa Senators in St.John’s, Newfoundland in front of 6,000-plus fans at the Mile One Centre. The Jets meet the Carolina Hurricanes for the second time in four days and will look to avenge a 4-0 loss last Saturday night, a game that was played in Charlotte, North Carolina.

There are currently 38 players left in training camp (3 players are on the injured reserve list) and the Jets are expected to cut their roster down to 25 players by next Monday. The Jets will be looking at certain players extra carefully, namely 2011 7th overall draft pick Mark Scheifele, who currently leads the Jets and the entire National Hockey League with three goals and three assists in three games. Although Scheifele still remains somewhat of a long shot to make the team, his performance over the past week has been nothing short of outstanding, even if its only the pre-season. Other players who are currently on the “bubble” include forwards Jason Gregoire, Carl Klingberg and Spencer Machacek while defenseman Paul Postma, who has five points in three pre-season games, is also looking to crack the Jets opening-day line-up as well.