With the return of the Jets there have been a number of calls for fans to tell their story.  A few weeks back local production company Frantic Films put out a call to fans for a television documentary.  More recently, we have become aware of the efforts of two cousins, Jeff & Marshall Stevenson who currently reside in Calgary but previously lived in Winnipeg who are set to film a documentary, entitled Jet Fuel.

We had a chance to catch up with the two cousins to ask them some questions about this project as it gets underway.

More on this exciting project after the jump.

IC:  What was your vision for this project and when did you start to think about undertaking it?

JS :  The original vision was simply to go on the road trip to be a part of the experience. That was an idea that came up almost as soon as the schedule was released. As our site, winnipegwhiteout.com has continued to grow in popularity, we decided it would be nice to do something for charity along the adventure. We wanted to be able to have video updates along the journey to encourage fans to tune in and increase their exposure. After speaking with our filmmaker Sebastian, the idea to shoot the documentary started to unfold. It was about a month ago that the idea to capture the passion of the fans became the primary vision.

IC:  You’ve entitled this film with the sub-heading ‘A movie for the fans, about the fans, by the fans’.  What do you think you will be able to achieve that might be missed by a more “official” documentary?

JS: While Marshall and I are not film makers by trade, I’ve been an aspiring filmmaker for a few years now. The skills I’ve learnt plus those of Sebastian who has released a short film, will ensure that this is an “official” documentary, shot in a more unconventional manner. We feel this will help translate the passion to the screen and thoroughly immerse the viewer in the passion and experience. Our end goal for this film is to produce a full-length documentary with a professional look and feel while capturing the passion of the fans, and we are very confident we’ll achieve that.

MS: It’s true that we’ve never taken on anything of this magnitude before, but as far back as I can remember I was always making movies for school assignments whenever I could. In fact, looking at them now I’d say some were documentaries. I even did one for Manitoba’s 125th birthday – if only I knew where that was. Essentially, we’re passionate about hockey and the Winnipeg Jets and first and foremost are fans. We’re confident that our passion will more than compensate for our lack of professional training to get a true edgy, raw look at fan passion.

IC:  Your site says your “original idea” was to drive 8000 km’s between Calgary, Winnipeg, Chicago, Phoenix and Las Vegas.  Do you still plan on following through with this as the main storyline?

MS: The main focus of the film will be to illustrate the passion of the fans. There’s no denying that we’re Jets fans, so of course the road trip will be a part of the experience. It won’t however be the main storyline. That said, as with any documentary, the story will continue to unfold on our travels and we’ll be there to capture the historic return of the Jets to the NHL

JS: As Marshall said the road trip will be there but the main storyline is the one the fans will create. 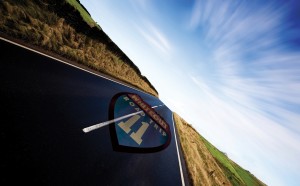 IC:  Have you already secured tickets to any of the games you are planning on attending?

MS: We’ve secured tickets for the games in Chicago and Phoenix. We’ll be 6 rows directly behind the Jets bench when they play in Phoenix. Winnipeg, as you know, is a tough one. We’re still exploring any possible leads to securing tickets to the home opener in Winnipeg. We’ve been talking to anyone and everyone. We’re happy to buy our tickets, but not $3000 per ticket for a P6 seat. That’s outrageous and we’re appalled at the fact a fan would consider selling seats at such a highly inflated price. Where’s their passion? We’d love to get some suggestions or help from your readers in being able to find tickets for that game.

JS: You can rest assured though that if we’re not in the MTS Centre, we’ll be right down in the heart of Winnipeg taking in the game with the fans. It’s one of those documentary experiences that we’ll just roll with. Of course, if you have three tickets that you’re willing to help us out with, we’d be happy to talk to you about them and would encourage anyone to email us at info@winnipegwhiteout.com if they have tickets they would like to sell at face value for that game or any other game for that matter.

IC:  What has the reception been like to this project?  Have you had any contact with True North?

JS: The reception since we announced the project has been exceptional. We expected the idea to catch on and be a success but we did not expect the type of exposure and positive comments we have received from our readers and the media this early into the proces.

MS: Since the beginning of June we’ve been talking with True North about our site. Once the schedule was released and this idea started to come together, we reached out to them again. We’ve had discussions with True North, the Blackhawks and Coyotes franchises and even the NHL to ensure that we’re going through the right channels and not stepping on any toes.

IC:  When do you expect this documentary to be completed?

JS: Our goal is to have DVD’s ready for Christmas. We should be able to narrow down a release date after primary shooting is completed in October.


IC:  You’ve partnered with Believe in the Goal, which is an extremely worthwhile charity.  How did you come to connect with them?

MS: We first connected with Believe in the Goal after we made a pledge to our readers to donate $500 to a user submitted charity if one of our stories was incorrect. We wound up being correct, but decided to follow through and donate to charity anyway. Believe in the Goal was one of a handful of charities our readers suggested. After talking with Believe, we struck up a partnership to be our chosen charity for the upcoming season. Cancer has affected both mine and Jeff’s lives through friends and family members, so when the opportunity came up to do something to help raise awareness and funds for Cancer patient care it was a no brainer.

JS: I’ve mentioned previously about some player encounters that really made me a fan for life, but one thing I haven’t shared before was my experience at my first playoff game. I have to admit, I spent more time as a small child watching the outrageousness of the fans all dressed in white then I did the game. I guess you can say I inadvertaly started scouting for this project at that early age.

MS: Honestly there are a lot of great memories. Unlike Jeff, I didn’t have the chance to meet any of the players, and if I did, I don’t remember. I remember my first game though. It was Detroit at Winnipeg and I was there with my Cub Scout group. I’m going to sound old saying this, but there were a lot of players on the ice without helmets on which made no sense to me. That game was definitely a fun time. I got to go with my dad and a bunch of friends to watch my first live sporting event. I can’t recall if I was more entertained by the fans or the game, but it was definitely a great memory.

IC:  You’ve lived in Calgary for a number of years and have likely developed some allegiance to the Flames.  But now that the team is back in Winnipeg and will eventually return to the Western Conference, who has your loyalty?  Jets or Flames?

JS: Let’s just say that any Flames memorabilia I may have collected ‘went up in Flames’ on May 31, and that consisted of a t-shirt. I’ve still got all my Jets jerserys even the ones that don’t fit any more. My loyalty has always been to the Jets and I was one of the people that constantly got laughed at out here for saying they’ll be back… I’m happy to be the one laughing now.

MS: I supported the Flames because I lost the Jets and wasn’t about to let another franchise even consider moving away. That said, I’ve got my Jets back now so there’s no question – I’m red, white and blue through and through. Go Jets Go!

JS: We’d like to just add that anyone who would like to get involved in this project is encouraged to visit our website JETFUELmovie.com. We’ve had some great stories submitted in just a few short days, but will still be accepting submissions up until filming starts October 7th.

MS: Heck, even while we’re on the road we’ll be taking ideas. They just might be hard to fit in, but we’ll consider any story about passionate hockey fans. You’ll also want to make sure that you connect with us on Twitter, YouTube and Facebook so you can get updated info while we’re on the road. There’s also whiteoutroadtrip.com where we’ll be setting up live streams and daily updates from the road during filming, so you’ll want to check that out too.

Stay tuned to Jet Fuel to find out all the latest with these two cousins as they film their Winnipeg Jets journey.