The Jets 2014 5th rounder is done for the season after being injured in a game in mid December. 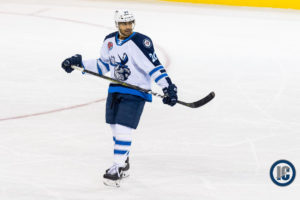 Fans have been wondering about the status of Jets 2014 5th rounder C.J. Suess who has been out of the Manitoba Moose lineup since a game against the Marlies back on December 14th.  During a post-whistle scrum he ended up at the bottom of a pile and left the game clearly in some distress with an upper-body injury.  When I spoke to Moose head coach Pascal Vincent the next day he indicated that the news was not good “It’s gonna be months.  But I don’t know how long exactly but it is not going to be soon.”

Three months later and with less than a month left in the AHL season I’ve been told that Suess is done for the 2018-19 season.  A tough break for the Minnesota product who had centred both the first and second lines this season for Manitoba and was developing quite nicely.

In his first season as a pro Suess started off red-hot scoring six goals in his first 10 games for Manitoba before he cooled down.  He was just starting to heat up again before the injury occurred having scored goals in back-to-back games.

He will be in need of another contract from the Jets since the one-year ELC he signed last March will expire after this season and he will become an RFA with arbitration rights.